Skip to content
Home » How severely locusts’ attacks can harm farmers in Sindh?
Previous Next

How severely locusts’ attacks can harm farmers in Sindh?

How severely locusts’ attacks can harm farmers in Sindh?

According to an estimation, locusts in Sindh have devoured more than 3 hundred thousand acres of crops consisting on wheat, maize, rice and different vegetables while Sindh government claims that more than 18 teams of provincial plant protection and agriculture departments have been working throughout Sindh to control locusts. Farmers have put their hands on their heads and instead of relying on the support of Sindh government they autonomously have started their own ‘Locusts Bhaghao Movement’ by adopting different techniques, somewhere by beating the drums in the fields, by playing high volume songs of Jalal Chandio (a local folk singer) in the fields and somewhere by stopping their children from going to school and with their entire families going into the fields to drive locusts away from fields but it seems locusts have decided not to leave Sindh.

Finally/obsessionally, such situation has forced local farmers to block roads and start protests against cruelty of locusts and helplessness of the government entities because their precious crops are being demolished in front of their eyes by locust’s attacks and  the poor people who only depend on crops feel themselves in a catch 22 situation. The history of locusts’ attacks is very ancient and it notifies that whenever locusts come, they also bring in devastation along. Food insecurity would be the major issue which can be caused by ongoing locusts’ attack in Sindh in near future. 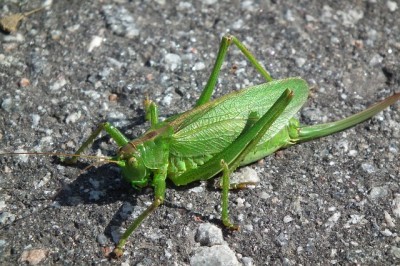 In 2018, a group of American researchers published a research report about locusts in which they stated that owing to raise in temperature locusts and many other insects move (shift/relocate their places) and that reallocation process makes them to become more hungry/greedy for eating. The researcher report further tells that in coming years due to climate change, more than 80 countries would be affected by very serious locusts’ attacks. The researchers also have the point of view that with rise of 1 degree Celsius temperature of Globe, chances of locusts’ attacks have also increased which affected crops like wheat, maize and rice worldwide as a gross loss of 10% to 25 % in the profit on these crops have been reported in recent past.

According to an American researcher Kirits Doshi, rise in global temperatures gives birth to more insects which require more food and such insects would move from deserted areas to areas having green fields and more water bodies. An FAO (Food and Agriculture Organization) report warns that a small swarm of locusts has the capacity to eat food of more than 35,000 people in a single day.

In 1958, a locust attack in Ethiopia damaged 167,000 ton crop of wheat on 1000 square kilo meters which was estimated as the food of 1 million people. Locusts have been called one of the oldest enemies of humans as the old Roman writer/philosopher Pliny the Elder   said that once due to an attack of locusts 8 hundred thousand people had died of hunger. The region he was talking about is currently consisted on countries Libya, Tunisia and Algeria of Africa.

Another American researcher Michael Luke in his reports about locusts says that due to water scarcity in the world, the deserts have been stretching and locusts have been nurturing in such deserts which can be a big threat for the world in future. Locusts in deserts get more active when the temperature increase and they finally become able to fly high and cover more distance. An active locust can cover up to 150 kilo meters distance in a day.

In 2004, locusts caused loss of 2.5 billion dollars in Africa. There are several examples of such locusts’ attacks which are enough to let our government know that how severely locusts can affect people in Pakistan.

Most recently, after locusts thousands of bats have attacked different Mango Orchards in Tando Jam area and causing heavy losses by damaging unripe fruit. This is another threat for farmers in Sindh while if we look at the government, it’s no way near to do anything or to find any way out regarding bringing relieve in lives of poor farmers.  This is the right time for Sindh government to wake up otherwise the day would not be far away when everything will be eaten up by the insects and animals while people die of hunger and thirst.

(The writer is a freelance journalist and he can be reached at: abbaskhaskheli110@gmail.com)